Alsina wins the ACE Award for the best research workCorporative 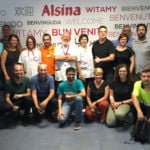